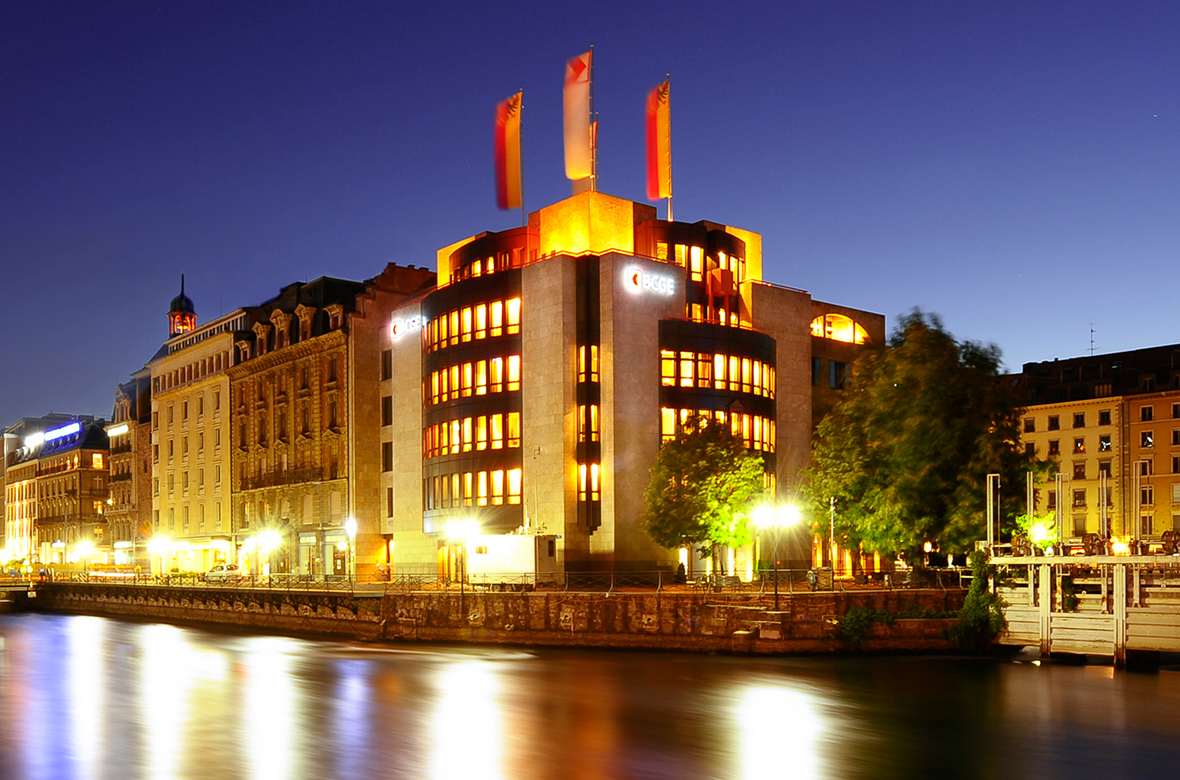 Geneva, 11 August 2020 – Half-year results show strong resilience in a recessionary economy. Although operating profit was down at CHF 51 million, net profit was resilient at CHF 55 million (-6.6%). Key business indicators improved with an increase in assets under management and administration to CHF 30.9 billion and growth in mortgage loans of CHF 226 million (total: CHF 11.9 billion). BCGE also granted Covid-19 loans to nearly 2,000 SMEs totalling approximately CHF 200 million. The bank increased its equity capital to CHF 1.675 billion (+0.5%). It thus has a capital coverage of 16.0%. In an environment severely disrupted by the health crisis and its impact on companies, the bank has set aside more cautious provisions than last year. Barring any further decline in the economic situation and taking into account the very positive commercial developments recorded, the bank expects overall earnings to be down over the year, while still seeing equity capital growth and the distribution of a dividend[1].

Key consolidated figures for the first half of 2020 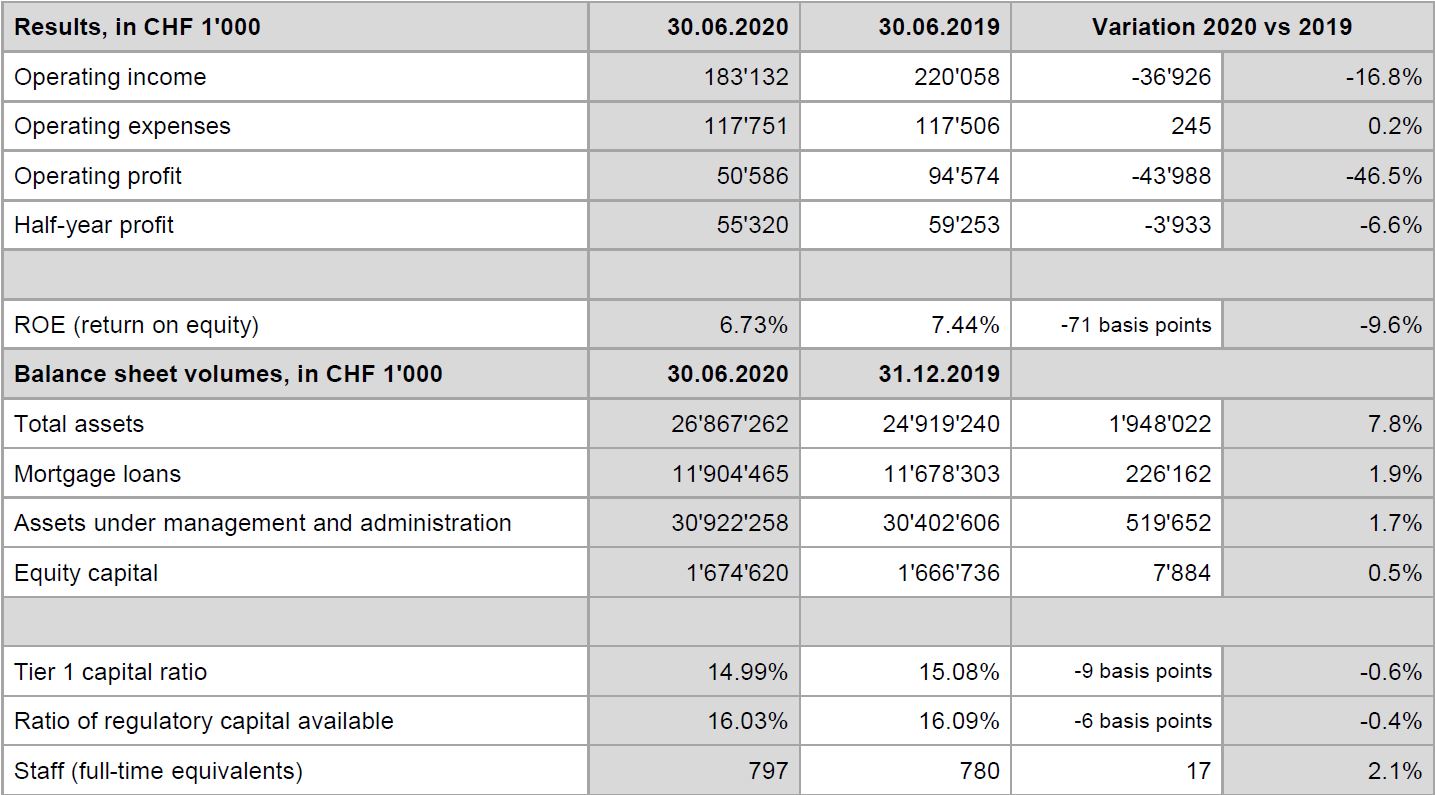 Business volumes were unaffected by the health crisis, as reflected by the increase in mortgage loans (CHF 11.9 billion) and assets under management and administration (CHF 30.9 billion). Although operating profit was down to CHF 51 million, this decline was essentially non-recurring in nature. Net profit was resilient at CHF 55 million (-6.6%).
The income structure remains well diversified which represents an advantage in this difficult period for some economic sectors. Net interest income was robust at CHF 111.5 million and commissions remained at a good level at CHF 59.1 million. Other results were affected by a fall in dividends from participations and a reduction in income from the bank's investment portfolios. Revenues in EUR and USD represent 30% of turnover, proof of the beneficial internationalisation of activities. Operating expenses are stable at CHF 117.8 million. They reflect the bank’s commitment to maintaining all of its medium- and long-term development projects. Seventeen new positions were created during the first half of the year (headcount: 797 FTE).

A major contributor to the financing of Geneva's economy

The bank lends a total of CHF 17.2 billion to companies and individuals. Since 31 December 2019, an additional 469 businesses have joined the ranks of clients, bringing the total to 20,450 businesses (legal entities). Mortgage loans increased by a targeted CHF 11.9 billion (+1.9%). Their share in the balance sheet total is moderate (44.3%), reflecting efficient diversification. It should be noted that BCGE contributed to the Geneva economy in a recessionary environment by granting 2,000 Covid-19 loans for a total of approximately CHF 200 million.

Increase in assets under management and administration
Private client assets increased by CHF 612 million (+4.0%), while institutional client assets fell slightly by CHF -92 million (-0.6%). Overall, assets under management and administration rose by CHF 520 million to CHF 30.9 billion. Noteworthy was the signing of more than 800 new Best of management mandates, boosted in particular by the newest addition to the range: the Best of Genesis.

Strong equity capital coverage
Equity capital increased by CHF 7.9 million (+0.5%), bringing it to CHF 1.675 billion. The consolidated equity capitalisation ratio exceeds 16% and positions BCGE in the circle of well-capitalised and sound banks, as reflected in its rating of A+/Positive/A-1, confirmed on 4 August 2020. Also noteworthy is the very high level of liquidity and the quality of refinancing, which for the most part is not dependent on the capital market.

The bank passes the milestone of 15,000 shareholders

The bank is delighted to see its private and institutional shareholder base expand. The number of individuals and companies that have joined the ranks of its shareholders is constantly increasing (+298 individuals or entities). As at 30 June, the bank had 15,131 registered shareholders (compared with 14,833 at the end of 2019).

Moderate decline in the share price in the first half of the year
The BCGE share price ended the half year period at CHF 182.50. Its evolution reflects the currently cautious climate for corporate securities in the banking sector. In relation to the size of equity capital, the intrinsic value of the share stands at CHF 234.69 and thus shows considerable potential for growth.

The strategic priorities that guide the bank's development are as follows:

The bank is continuing its business expansion despite a recessionary economic environment. It relies on the diversity of its skills and on the alignment of its business model with the specific demands of the Geneva and Swiss economy.

Barring any further decline in the economic situation and taking into account the very positive commercial developments recorded, the bank expects overall earnings to be down over the year, while still seeing equity capital growth and the distribution of a dividend.


[1] Annual results will be published on 23 February 2021.
BCGE – The results show strong resilience